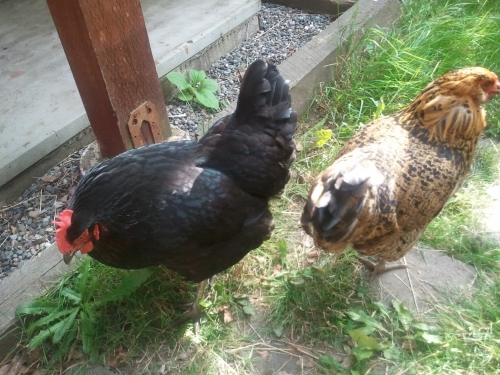 Confused by the old sandbox

Jason recently took pity on the chickens – it was a sort of gray day with occasional sun and they were bawking so mournfully. So he let them out to run around the yard while he sorted out crap in the toolshed.  He found that chicken depth perception and poor memorization skills meant that if he penned them in with paint cans they would not pass the cans. And also, even if he removed the cans, they would not realize the way was clear. We had a memorably stupid series of popcorn luring moments, where they didn’t pay attention, and then he just decided to ignore them after throwing popcorn in the coop.

When they relaxed he started chasing them toward the popcorn in the chicken run and finally managed to get all three back in the Omlet Eglu. He could have waited for dark but that’s taking chances with dogs and hawks in our neighborhood. Though apparently in Seattle we are getting worse at keeping our birds of prey alive .  (There have been hawks hanging around Highway 520 but no, the bus had to hit a bald eagle.)

In the photo above, you see Bossy and Business (right), exploring the perimeter of the ancient shallow sandbox that came with the house. In winter the coop would be placed under the deck and behind that red post – but for now it’s just gravel and weeds and the sandbox lid. Business DID manage to catch a worm, though not where my camera could nab her at it.