The taste of their own chicken eggs 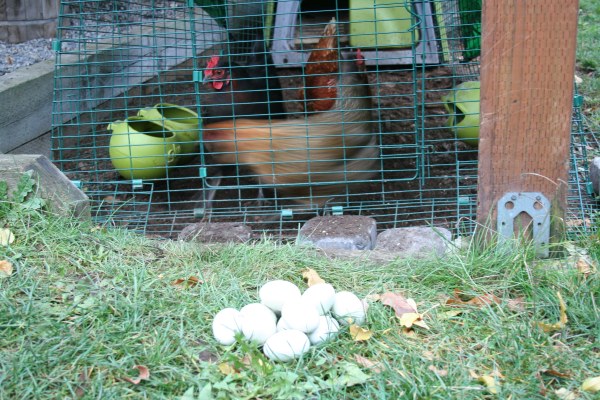 I don’t remember the day, but I remember the look of horror Jason had on his face when he came back, one egg in his hand from the coop.

“Cannibals!” he shrieked. ” They eat their own eggs!”

What had happened was this: prior to this experience, being brought home by us as teenagers unable to lay, then suddenly discovering the miracle of egg laying (but not sure exactly why it kept happeneing) – none of the chickens had ever seen the inside of an egg. They had no idea it was edible – even though they had tried really anything inside the coop (even to Jason’s dismay, a packing peanut he had to forcibly remove), the eggs had remained intact and sacred.

Until I think it was Bossy – had to lay an egg when one of the others was on the nesting bowl and so laid it elsewhere inside the coop. Well. Push come to shove, who knows how much that egg rolled around and finally, it broke.

Bossy ambles over and says “Aha, that looks tasty!” and thus had yellow yolk on her beak when Jason reached inside the coop for the other egg (probably Business Chicken’s) that was in the nesting bowl.

After that, it was a bad week, with Jason grabbing the eggs as fast as he could before work so they didn’t get into the habit of pecking what they had laid and eating them. You can’t be too careful. It’s like a taste for blood, or chocolate – you don’t want to let them acquire THE TASTE for EGG.

More from the Virginia Tech Cooperative Extension on egg-tasting prevention (there really is no cure).