As I wander around noticing all things chicken in human culture, I have realized that chickens have also permeated the fitness/get healthy meme in our society as well as the cookbooks “eat healthy” meme of our society.

Check out the Livestrong Chicken Wing Exercise here  – Chicken Wing is apparently a bad condition to be in (I had thought it was describing the motion of the exercise).  Basically the shoulder blade juts out because the surrounding muscle tissue is weak or the nerves are damaged. Strengthening the area controls this condition.

Step 1 of the exercise  begins while  lying on your back (see Livestrong for more dignigied  info). 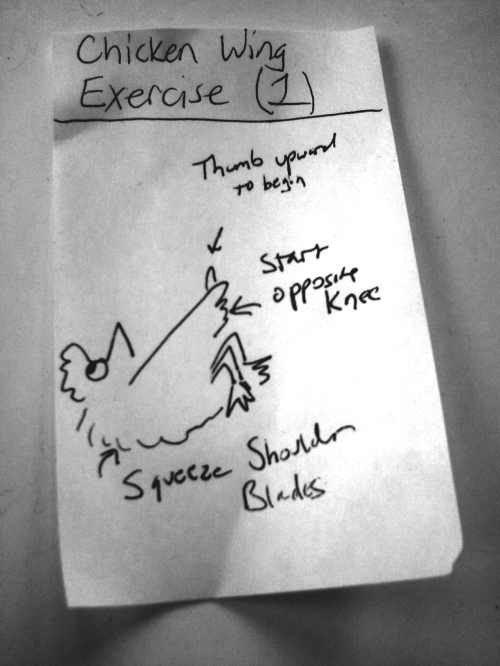 Step 1 - lie on your back, hand to opposite knee, thumb up.

Step 2 of the exercise  is the actual motion – you bring your arm back across your body in a diagonal motion,  straight up in the air, until it is directly overhead. Return to your knee with thumb down, and repeat.  If you wanto go for broke, they also recommend throwing both arms above your head, but I did not cartoon that part as you see it often enough in other chicken drawings….

There is actually an exercise recommended by the Mount Nittany Medical Center  called Chicken Wing which follows more along the lines I thought – you are imitating a chicken’s movement’s a bit more.  Both hands behind head, elbows bent like chicken wings).  They recommend it for post-breast-surgery patients.