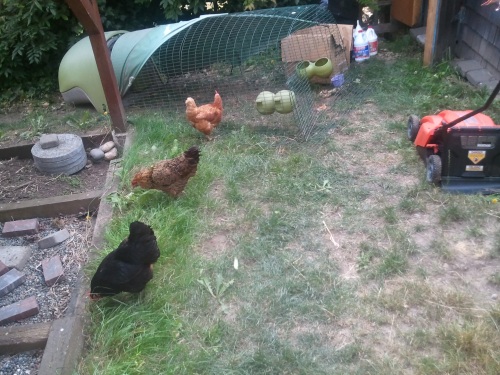 (This is a photo of our chickens, just for fun, in the happier summer days)

While a good Samaritan in Maine was able to save the humans when a standalone garage with an attached chicken coop ) caught on fire, seven chickens perished. An Idaho coop had lamp issues and also caught on fire.

Apparently chickens and their eggs can help your memory (or rather, protect against loss of memory due to aging)

Anti-boss rage incident from chicken plucker in trinidad asked to pluck 20 more chickens. Not as high drama as the airline attendant shooting off down the plane slide, but as the economy worsens you can see more of these stories as likely to appear.

But it seems communities are mellowing to the idea of folks raising chickens themselves. Check out the victory in Corpus Christi  Texas for one chicken owner and a Pasco, Washington  chicken owner’s request for permission from her governing city council.

If I can get it done, the next “how to chicken” post from Jason or me will be about “putting the chickens up on blocks” for the winter.  Why we do it, even though they bawk and moan about it a lot….